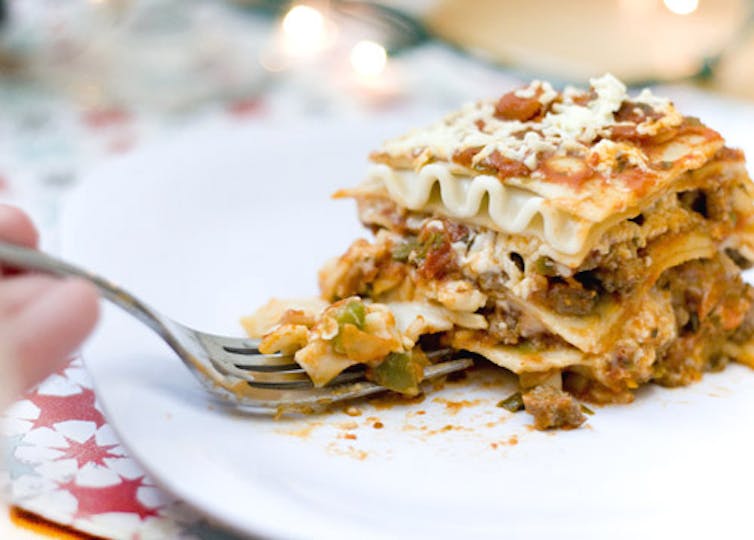 The Neolithic Revolution introduced a whole range of new foods and proteins into the human digestive tract. But this phenomenal change created the perfect conditions for the rise of coeliac disease.

While most proteins were readily consumed, some people’s immune systems struggled to tolerate others. Wheat was the first cereal to be widely domesticated, and in the case of the gluten protein from wheat, the result of this struggle was coeliac disease.

When people with coeliac disease consume gluten, an abnormal immune reaction occurs causing inflammation and damage to the small bowel lining. This impairs absorption of nutrients and can lead to a wide range of symptoms and medical complications. 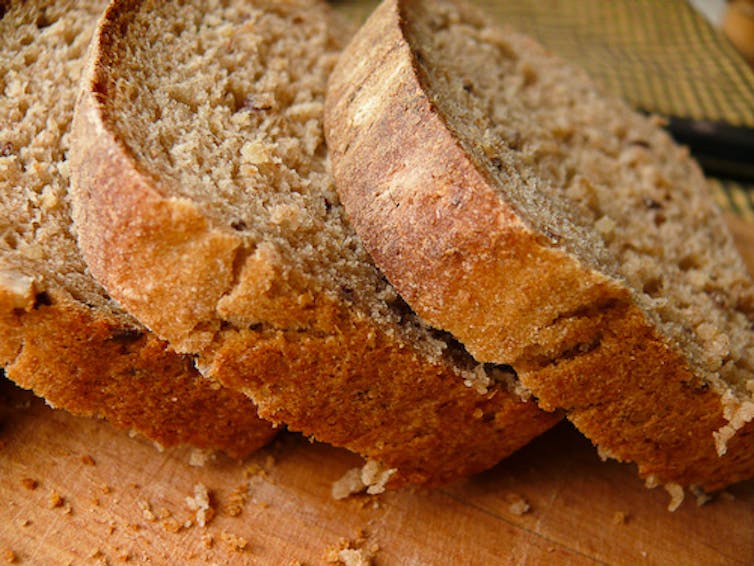 The discovery was fortuitous – a wartime bread shortage led Dutch paediatrician Willem Dicke to observe improved health in children with coeliac disease, and note their relapse shortly after food drops of bread returned wheat back into their diet.

The work of Australian physician Charlotte Anderson established it was the gluten component of wheat (and also rye, barley and oats) that caused coeliac disease. It was the 1950s and the age of treatment with a gluten-free diet had begun.

Prevalence and the reasons why

Far from being a medical rarity, coeliac disease is very common today, affecting more than one in 100 Australians. And in the last half century, it has become approximately twice as common every two decades, similar to the rise in other immune diseases, such as type 1 diabetes. 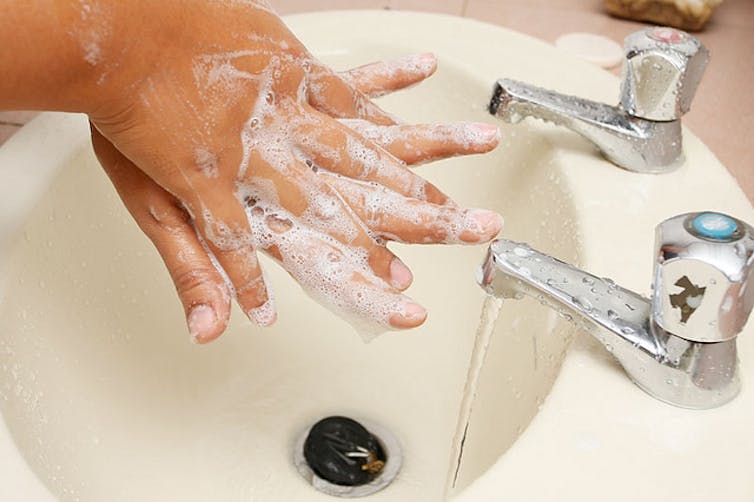 The increased prevalence of the disease may be due to hyper-conscious hygiene practices.
sydeen/Flickr
Why the prevalence is increasing remains unknown, but a variety of environmental factors and the “hygiene hypothesis” have been proposed.

Today, people are typically diagnosed in adulthood and are mostly female. Alarmingly, 80% of Australians with coeliac disease remain undiagnosed. This is because symptoms are wide-ranging and largely non-specific. And coeliac disease still remains “off the radar” for many doctors.

Many symptoms but simple diagnosis

In people with coeliac disease, gluten causes widespread inflammation not limited to the bowel. Patients are commonly troubled by gut upset (such as bloating, abdominal pain, diarrhoea and/or constipation), lethargy, anaemia, and nutrient deficiencies, such as low iron. They can also suffer loss of fertility, migraine headaches, abnormal liver function, arthritis and autoimmune diseases, such as type 1 diabetes and autoimmune thyroid disease.

Bones are more likely to be thinned out (osteoporosis) and patients can develop certain cancers, such as lymphoma. The good news is that early diagnosis and treatment can greatly reduce the chances of these complications. 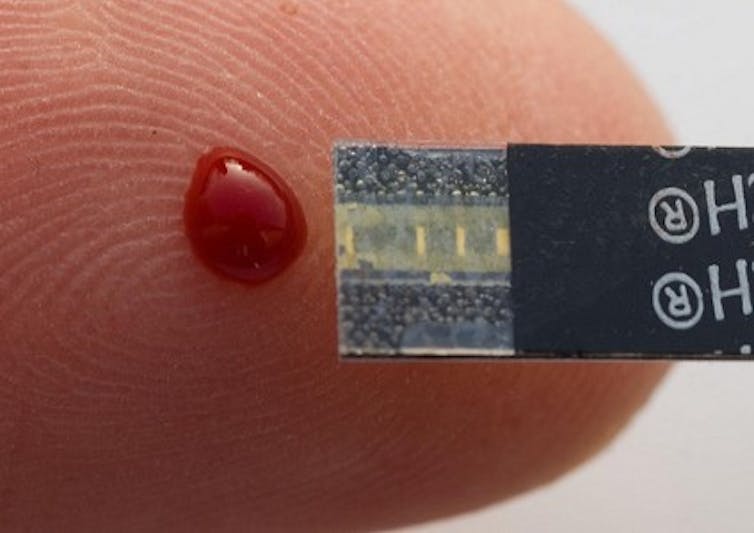 A blood test is a simple way to indicate whether you may have coeliac disease.
Healthcare Experts/Flickr
A simple blood test is used to screen for coeliac disease, although making a definite diagnosis requires demonstrating the characteristic small bowel changes of flattened and inflamed lining (“villous atrophy”) under the microscope. Small bowel samples are readily obtained by gastroscopy, a ten-minute procedure performed under sedation that introduces a flexible instrument via the mouth into the small bowel to allow samples to be taken.

It’s vital that a gluten-free diet isn’t started before testing for coeliac disease, as this can cause false negative results.

Genes and the environment

Coeliac disease shares certain predisposing genes with autoimmune diseases, such as type 1 diabetes (which explains why these conditions often occur together). These genes control how the immune system “recognises” and responds to foreign proteins and are fundamental for disease to develop.

But genes alone are not enough to cause coeliac disease and environmental factors are thought to play an important role in “triggering” disease in those with genetic susceptibility. Some factors appear to increase coeliac disease risk (such as rotavirus infection in infancy) while some may reduce the risk. Breastfeeding at the time gluten is introduced to an infant, for instance, may protect against developing disease.

The challenge of gluten-free diets

Excluding all dietary sources of gluten from wheat, rye, barley and oats allows the small bowel damage to heal and symptoms to resolve – but it’s far from easy. Wheat flour, the most common and significant source of gluten, is found in many foods, such as bread, breakfast cereals, cakes, biscuits, pasta, pastries and pizzas. 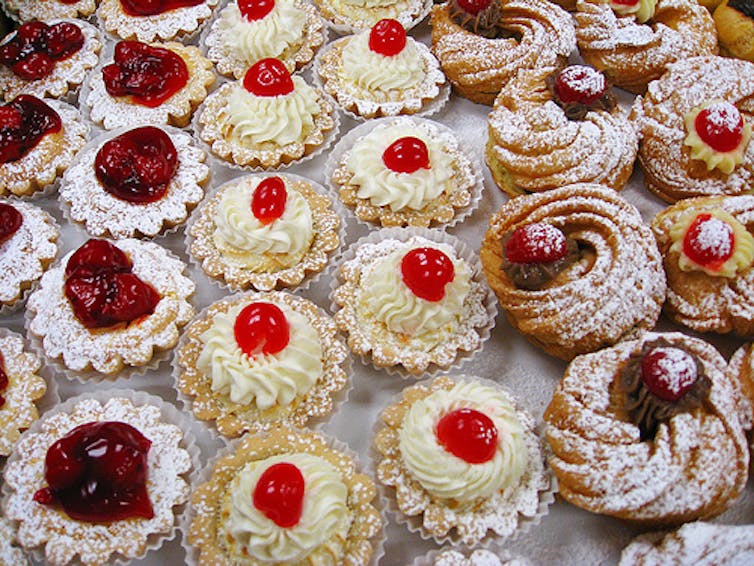 People with coeliac disease have to learn how to pass up the pastries.
pastryfusion/Flickr
There are also “hidden” sources of gluten found in sauces and processed foods and less obvious items, such as malted foods and beer. While gluten-free alternatives are increasingly available, they’re much more expensive and generally much less palatable – anyone who has ever tried gluten free bread will know how dense and crumbly it is!

Compounding its complexity, cost and poor palatability, the gluten-free diet needs to be very strict to work – even small amounts of gluten (about 50 milligrams – less than 1/100th of a slice of bread) can cause bowel damage.

That’s why patients need to be obsessive about excluding gluten – for people with coeliac disease the gluten free diet is not a fad but a serious medical treatment.

Is gluten free for everyone?

It’s hard to miss the ever-expanding sections of supermarkets dedicated to selling gluten-free food and many restaurant menus list gluten-free options. The gluten-free food industry is booming, with a global market projected to well exceed US$4 billion over the next three years.

Interestingly, a recent market survey commissioned by Coeliac Australia indicates that approximately 10% of Australians are currently following a strict or significantly reduced gluten diet. This is ten times greater than the total number of Australians thought to have coeliac disease. 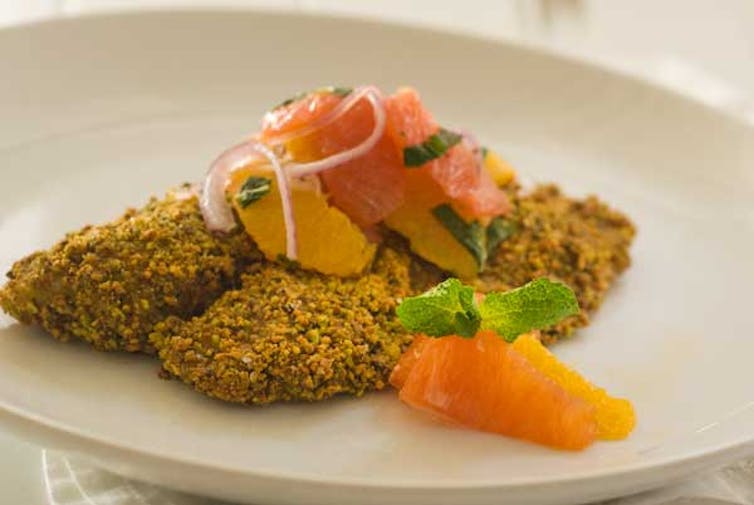 A gluten-free diet isn’t all that tasty, and not necessarily the healthiest option.
simply..gluten-free/Flickr
It’s likely that alternative health practitioners, disease advocacy groups, proliferating internet blogs and forums, and the gluten-free food industry are directly or indirectly fuelling the mounting public perception that a gluten-free diet is intrinsically “healthy” or suitable to treat a variety of symptoms and illnesses.

Many cases of perceived wheat or gluten intolerance reported by patients is not due to gluten itself but intolerance to the wheat’s carbohydrate component (fructans). For some, a diet reducing fructans and other fermentable carbohydrates, a low FODMAP (fermentable oligo-, di-, mono-saccharides and polyols) diet can be a more effective and appropriate treatment than going gluten free.

Inadequate and delayed diagnosis of coeliac disease remains a major problem in our community so improving awareness and testing is a major goal to reduce the burden of this disease.

Excitingly, there’s been significant progress in understanding the genetic and immunological basis for why gluten is toxic in people with coeliac disease. Immune cells called T cells are the key mediators of damage in coeliac disease. These T cells are stimulated to cause damage by specific gluten fragments, which have now been identified.

Such insights are allowing a variety of potential treatments for coeliac disease to be explored, some of which will supplement and some of which could one day replace the gluten-free diet altogether.