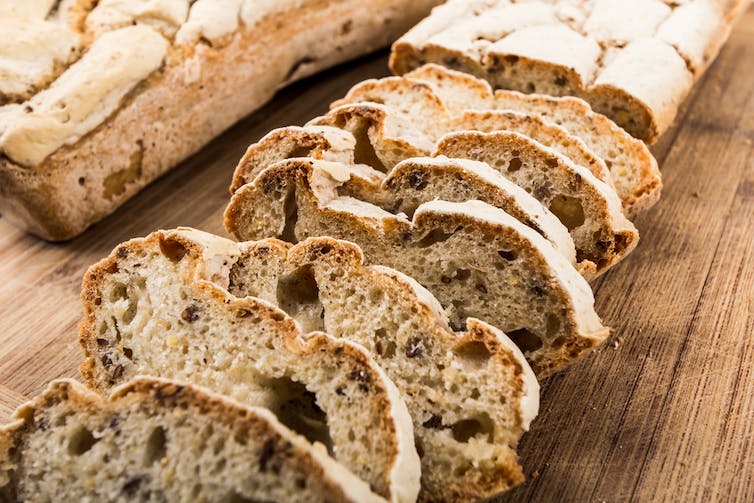 Even after many years on a gluten-free diet, many Australians with coeliac disease continue suffering persistent symptoms.
from shutterstock.com
Finlay Alistair Macrae, Melbourne Health

When people with coeliac disease eat foods containing gluten, they have an abnormal immune reaction. This results in inflammation and damage to their small bowel lining. But the trouble doesn’t always go away for those coeliac sufferers who stay away from gluten. Studies show even after years on a gluten-free diet, many Australians with coeliac disease fail to heal their bowel, or continue suffering persistent symptoms.

It’s hard to adhere to a lifelong gluten-free diet. It is expensive and can be be socially isolating. But even those who remain vigilant can find complete avoidance of gluten a challenge due to hidden sources of gluten.

Gluten is mainly found in wheat, rye and barley – some research also suggests it can be present in certain oat varieties. Common hidden sources of gluten are sauces, drugs (prescription and over the counter items, including dietary supplements), shared food preparation and processed meats.

Potential hidden gluten is a legitimate source of anxiety for patients, including those who have acute symptoms on minimal exposure to gluten and so remain unsure of the safety of their daily routine.

This is why a number of approaches in non-dietary treatments have been investigated around the world. They include a vaccine to induce gluten tolerance, and drugs to inhibit antibodies activated by gluten during the immune response. One therapy showing good results in clinical trials is a supplement that helps break down the toxic portion of the gluten molecule. This is know as enzyme supplementation.

Without the enzyme, the immune response kicks in and results in gut inflammation.
Researchers in Melbourne proposed the idea of supplementing a digestive enzyme in coeliac patients. A clinical trial I supervised in 2005, where coeliac patients were given supplementation with an animal-derived endopeptidase, showed promising results. But animal viruses and other pathogens potentially capable of infecting humans meant we had to abandon this type of supplement.

To date, two types of enzyme treatments, an American and Australian one, have been evaluated in clinical studies. The American product called ALV003 was compared with the placebo treatment. In this trial, 16 Finnish patients with coeliac disease were given the enzyme and 18 given a placebo. Bowel biopsies later showed gluten-induced injury in the placebo group, with no progression of damage in the group taking the enzyme.

The Australian product, called GluteGuard, is based on a papaya fruit enzyme called caricain. This enzyme has proven to be effective in coeliac patients before. A 2015 study showed adding caricain to bread dough reduced toxicity to gluten by 90%.

GluteGuard was evaluated in two clinical studies in Poland. The first study was of 20 patients with coeliac disease who were in clinical remission on a gluten-free diet. All patients ingested one gram of gluten (equivalent to around one slice of bread) each day for 42 days, with 14 of them also taking GluteGuard and six taking a placebo tablet.

Patients recorded their symptoms and well-being each day, and intestinal tissue was examined before and after the study. Most (13 of 14) coeliac patients taking GluteGuard (93%) demonstrated no detrimental changes in clinical symptoms, biopsy results or well-being throughout the 42 days. Four of six (67%) taking placebo developed severe coeliac symptoms and withdrew from the study after 14 days, compared to one of 14 (7%) from the treatment group.

The second Polish study investigated the effectiveness of GluteGuard in patients with dermatitis herpetiformis (also known as Duhring disease) a skin condition in coeliac patients, also triggered by gluten components. Patients with the condition suffer an itchy, blistering and burning skin rash.

All participants in this trial were in clinical remission. They consumed around six grams of gluten daily for seven days, with ten concurrently taking GluteGuard tablets and ten placebo. Those taking GluteGuard fared much better with 81% being protected from increasing areas of skin lesions and a substantial 71% reduction in the appearance of skin lesions. There was also a large 38% reduction in the emergence of a troublesome itch.

Of the seven patients who withdrew from the study due to gluten symptoms, six were taking placebo.

These clinical trials met high standards. They were randomised, meaning participants were randomly allocated to receive the treatment or placebo. They were double blind, so neither the participants nor the researchers knew which patient was receiving which intervention.

Based on these trials, enzyme supplementation promises to be a useful adjunct for coeliac patients anticipating unavoidable exposure to gluten – such as when travelling or eating food prepared outside their direct control.

It’s important to note enzyme supplementation won’t cure coeliac disease, and sufferers still need to avoid gluten. But the evidence suggests it helps in digesting hidden dietary gluten and could make life much easier for many coeliac sufferers.