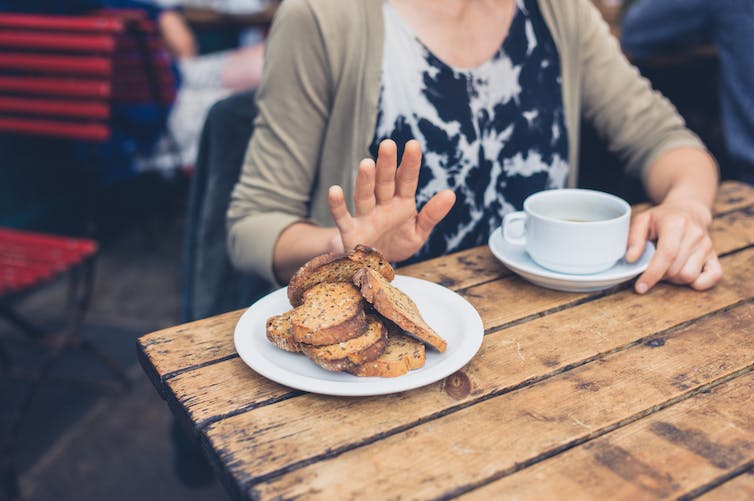 Of the many food fads, “gluten free” is one that can be unhealthy.
from www.shutterstock.com
Suzanne Mahady, Monash University

Coeliac disease, an allergy to gluten that causes damage to the intestine, affects 1% of Australians. But more than ten times this number, or around 11% of the population, follows a gluten-free diet by choice, and up to 30% of people in the United States try to reduce their gluten intake.

Gluten-free foods are frequently perceived as a healthier alternative, because of a alignment with a “wellness lifestyle”. But is there scientific evidence to support this?

Recent large studies have not found health benefits for a gluten-free diet, and in fact the opposite may be true.

Read more:
Health Check: should I choose a gluten-free diet?


Researchers followed a group of more than 100,000 people in the US for nearly 30 years and found a gluten-free diet was not associated with a healthier heart. It’s not clear whether this was due to something in the gluten-free foods, or the avoidance of wholegrains, which are considered protective against heart disease.

One study suggests gluten may be beneficial because it lowers levels of triglycerides in the blood. These are “bad” fats that increase the risk of heart disease. 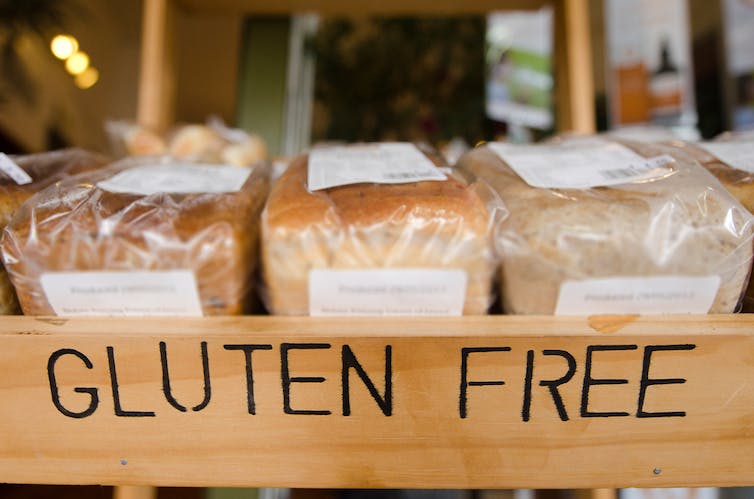 Not eating enough gluten could increase the risk of diabetes.
from www.shutterstock.com

Wholegrain products are made using the three parts of the grain – the bran (outside, which is rich in fibre), the germ (the seed) and the endosperm (the starchy, carbohydrate-rich centre). Together they form a bundle of fibre, carbohydrate, vitamins and minerals. Packaged gluten-free products such as bread frequently use only the carbohydrate component using refined flours from rice, corn or potato.

Read more:
Everything you need to know about coeliac disease (and whether you really have it)


These high carbohydrate foods may cause a sharp rise in blood sugar levels and may predispose to diabetes in the long term. Packaged gluten-free products often have added sugars to enhance flavour, and add emulsifiers and thickeners to improve the texture and make it similar to bread.

Gluten-free markets have risen exponentially in the last decade due to consumer demand, even extending to the production of gluten-free food for dogs. Whether the market will expand or diminish with time is unknown, but food fashions are not new.

Consider the popularity of low-fat diets in the 1980s, when butter was a villain. Now butter is now back in vogue, with sales increasing. Similarly, red wine used to be considered protective for cardiac health, but guidelines for safe alcohol consumption now recommend reduced intake.

Of course, naturally gluten-free products such as plant-based foods, ancient grains and dairy are all part of a healthy and balanced diet, but there does not seem to be a health benefit for the processed and packaged gluten-free replacements over wheat-based versions.

Why are gluten-free diets so popular?

Non-coeliac gluten sensitivity is different from coeliac disease. In coeliac disease, gluten intake causes damage to the intestine’s lining, which reverses with a gluten-free diet. In non-coeliac gluten sensitivity (also called “gluten intolerance”), symptoms like bloating and wind are common, but no intestinal damage or long-term health effects occur.

Read more:
Why do people decide to go gluten- or wheat-free?


To better understand this condition, researchers set out to determine whether it was gluten intake or the perception of gluten intake that may be contributing. They designed a study in which self-identified gluten-sensitive people were fed gluten-free, low gluten and high gluten foods, but didn’t know which they were eating.

All diets were also low in wind-causing sugars, called FODMAPs, which can cause similar symptoms. They found most of the group improved regardless of whether they were on a high gluten, low gluten or gluten-free diet. They concluded there was no evidence for gluten alone being responsible, but the reduction in FODMAPs could explain the symptom improvement.

Another reason people may report improvement when commencing a gluten-free diet is the exclusion of many other foods that are known not to be healthy, such as cakes, biscuits, crackers and beer. These dietary changes may also contribute to overall wellbeing.

So where to from here?

For people without coeliac disease, there’s no evidence to support claims a strict gluten-free diet is beneficial for health. It’s even possible the opposite is true, and the avoidance of dietary whole grains resulting in a low fibre intake may be detrimental.

Given gluten-free foods cost around 17% more, perhaps it’s time to reconsider a strict gluten-free diet chosen for health benefits alone, and instead include a diversity of gluten and gluten-free foods, with dietary variety as the key.